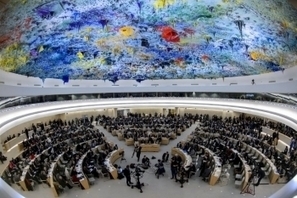 I have the honour to make this statement on behalf of a group of 46 States.

We welcome the positive steps taken by the Government of Bahrain in order to improve the human rights situation. In particular, the establishment of the Office of the Police Ombudsman, the Special Investigation Unit, the Prisoners’ and Detainees’ Rights Commission and the creation of an NHRI. We urge these institutions to proactively fulfil their mandate and encourage the Government to uphold its commitment to these institutions and their independence. We also welcome the recent report of the Ministry of Interior’s Ombudsman.

We note with satisfaction that a technical visit of the OHCHR took place this year and that public consultations between all stakeholders, including civil society were conducted during the visit. We welcome the fact that the OHCHR was allowed to visit prisons and could support the parliament in the creation of the National Human Rights Commission to be in conformity with Paris Principles.

However, the human rights situation in Bahrain remains an issue of serious concern to us. We are concerned about the increases in long sentences for exercising rights to freedom of peaceful assembly and of association and the lack of sufficient guarantee of fair trial. We are concerned about the repression of demonstrations. There are also concerns that peaceful demonstrations are frequently disrupted by a minority of violent demonstrators. We expect that all sides refrain from violence. Furthermore, we are concerned about the continued harassment and imprisonment of persons exercising their rights to freedom of opinion and expression, including human rights defenders and journalists. We are troubled by continuing reports of ill-treatment and torture in detention facilities. We are also concerned about cases of arbitrary deprivation of nationality without due process. Lastly we are concerned that there is insufficient accountability for human rights violations and urge that all allegations are properly investigated including by the newly established institutions. In that regard we also note the need to continued efforts to judicial reform to ensure its independence, impartiality and improved capability.

We call upon the Government to address these concerns and expedite the full implementation of the recommendations received from the BICI and the UPR recommendations accepted by Bahrain by undertaking further measures, in particular amending and repealing legal provisions that unduly restrict human rights. We call on all parties to constructively and inclusively collaborate in this regard. We urge the Government to further enhance its cooperation with the OHCHR and the Special Procedures of the Human Rights Council and to reschedule previously planned visits as soon as possible. We call on the authorities to pursue an open door policy for all civil society organisations.

We urge the Government to release all persons imprisoned solely for exercising human rights, including human rights defenders some of whom have been identified as arbitrarily detained according to the UN Working Group on Arbitrary Detention. We also urge the government to appropriately address reports of ill-treatment and torture of prisoners and to ensure an independent, thorough and impartial investigation and prosecution of these cases, as well as of other allegations of human rights violations.

publicly condemn Bahrain’s continued human rights violations, especially torture and extrajudicial killings;call for the immediate release of all individuals imprisoned solely for exercising their rights to freedom of expression and freedom of association and peaceful assembly;call on the Bahraini government to implement the recommendations of the Bahrain International Commission of Inquiry in the context of the second cycle of the Universal Periodic Review; encourage the OHCHR to monitor the human rights situation in Bahrain and to report back on Bahrain’s progress on implementation of the recommendations;call on Bahrain to agree to establish a full mandate office for the OHCHR;call on Bahrain to immediately allow access to all Special Rapporteurs who have requested visits to Bahrain, especially the Special Rapporteur on Torture;call on Bahrain to submit the periodic treaty reports as obliged under human rights conventions, which they have exceeded to, and to sign optional protocols that were accepted during Bahrain´s Universal Periodic Review;

Please see the full recommendations to the OHCHR, undersigned by the BCHR and 20 other NGOs: http://bahrainrights.hopto.org/en/node/6890